Makeup: A Purge and Purchase Story

Once in a blue moon, I get the idea to buy makeup.  Usually, there is an event that I will be attending as the reason for this thought to cross my mind.  This time my motivations were different.  I am spring cleaning my home, and I had decided that I have too much makeup for the rare occasion that I wear it.  I decided it was time to purge it.

I made it official.  I shared my plan on Facebook.  Then I got scared.  Full on panic.  I was worried that if I threw it all out, I would not be able to replace all of the components within my budget.  So I gathered it up to have ready to purge after I bought the new makeup.

Since I had made this a public announcement, I started getting comments.  I decided that I would make use of $85.oo in Optimum Points and buy my new makeup at Shoppers Drug Mart.  I was advised which store to choose in the city, there are two, and then I was asked if I went yet or not.  A few friends wanted to help.  I felt at this point that it was becoming more of an event than a shopping trip on the other side of the city.

One of my friends is trained in makeup application.  She was joining me to get a few hours break from being a full-time Mom.    She had asked me a few weeks ago that if there was anything that I was doing, she would gladly join me to get a break.  She lives outside of the city, and we don’t see each other as much as we used to, so I thought it would be a perfect girls day out if she was available.  She made arrangements, and I would be picking her up the next day.  We decided that if our mutual friend felt up to it, that we would take her too, or if not, we would visit her before the day trip was over.  By this time another friend had asked if she could join us.  So, a party of 4 showed up at the store the next day.

I had decided before we got there that I was going to need a skin care routine.  I don’t really have one, and I wanted to replace the skin cleansers I had been using because they had expired.  The lady I was consulting with helped me with all of my choices.  She was amazing!  She walked me through the basics and helped me pick colours and brands that some friends had recommended, but I had never heard of before.  It was an adventure!  One friend joined the shopping spree and found the store to be quite impressive, as I did.  Our other friends were with another consultant, and one of them, the friend I was giving a day out of the mommy land, she was getting a makeover.

Those of us that were shopping got a bonus lip gloss and 2 free movie admission tickets.  That was really great!  His & Hers gift for her shopping.  Win-win!

When we finished there, it was time to really take a hard look at the old makeup and force me to purge it.  There was a Starbucks next door, so we went in there with my 2 large Ziploc bags full of my older makeup.

We got our drinks and snacks and found a table.  When we were settled in, we made a plan of attack.  Certain things needed to be tossed.  Others could be donated, my friend has a teenager.  As discussed in detail on my Facebook wall, you can clean powdered makeup with alcohol.  90% was recommended, the kind you have to ask for. You wet the powder and wipe off the top layer of the powdered makeup with a tissue.  The rest of the powder is then left to evaporate the alcohol, and it is clean and able to be used safely again.  Makeup that was in decent shape was put into a donate pile.

All the old mascara was tossed, as it was all more than 3 months old.  Any colours or products I wasn’t certain about,  were set aside to compare to my new makeup at the end.  I would say that the donate/toss makeup amounted to 2/3 of the total makeup I had there before I went shopping.

Left: to toss Right: to donate

After we all went home, I then began planning phase 2 of this plan I had hatched.  I needed to find a way to keep all of the new and old makeup organized.  I went on a few different trips to some local stores and found bits and pieces to pull together my very own cosmetics counter in my Master Bathroom.

This is the final result of my organization phase: 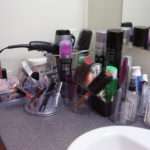 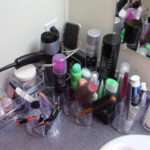 Obviously, I did not buy all of the product shown here for $85.00 in Optimum points.  With the points, you have to pay the taxes when you redeem them.  So I think I made good use of the points, and I am using the cleansing routine now on a daily basis.

The pic below shows what I kept, in the Ziploc bag, and what is new is placed on the counter. This is the final result of the purge and purchase:

New and To Keep Makeup.

I have also purchased Vichy Skin Cleansing, Toning, and Moisturizing products, not shown.  I am happy with my purchases, although I find the new lip stain ( the 2nd tube from the right) to be a little bright.  I guess that means I will have to go shopping again…

When I take the time to actually do my makeup and have a reason to put it on, I will write about the experience, with before and after pics.  I have lots of before pics to choose from.  What a fun afternoon we had.  Do you have any organization tips for your cosmetics?  What product is in your must have list?