It is Sunday.  I am gearing up to do all the things I haven’t done yet this weekend that are on my weekly list.  That is not to say that I have been lying around on my couch until now, either.  I have been out and about this weekend, spending time with friends.  That is important, too.

Friday night I was invited to celebrate a friend’s birthday, hosted by a mutual friend.  I need to make sure that I eat, and that I keep it healthy.  I made deviled eggs, Big Mac Salad, with regular meat and soy meat options, and I made dessert.  We played board games and just dance.

This was my second time making deviled eggs.  They were a hit both times, so I think it may become a potluck staple for me to bring.  They are on plan.  People like them. Win win!

The salad is a version of a THM recipe.  It can be found easily online.  The soy meat was for the vegetarian of the group, and he got the leftovers since it was his birthday celebration. The THM plan is not big on Soy products, but I wanted my friend to have the full Big Mac Salad experience.  So I improvised, and everyone seemed to like the salad too.

Dessert was an adventure.  I made Rainbow cake in mason jars. 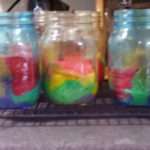 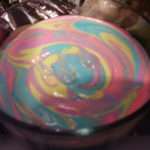 I made Unicorn Rainbow Dip for a cake topping, and of course, added rainbow sprinkles.  I probably won’t be making this cake in mason jars when I make it again.  The dip was amazing, and not too sweet like icing would have been.  I think it would be wonderful for cake pops.  I made it the night before, and let it set in the fridge overnight.  This was a quick assembly after work on Friday.  It took longer to make the deviled eggs.  My friends added dips and loaded potato skins and bruschetta and deep fried pickles to the table.  It was a lot of food for a party of 4.

Yesterday I wanted to spend time with another couple that my husband and I are friends with.  We went out for supper, and back to their place to watch some movies on Netflix.  I had not seen the John Wick movie, and they all rewatched while I saw it for the first time.  Now I can be ready for the newly released sequel, that we want to see as a group if we can plan it that way.

I was busy, and now I am scrambling to play catch up before Monday rolls around again.  I am still working from lists.  Some things get done, and other things carry forward to the next weekend.  It is time to crank the tunes and get some chores done.  I have a few hours to spend on that, and then it’s time to get ready for another week at the day job.  Until next weekend, when I become the Weekend Warrior again.  Although I was more of a warrior of the social scene this weekend, there is still some time to make progress on the chores, if I hurry!  Time to Bounce the House once again!