Oh my goodness!  I am busy, busy, busy this weekend!  It is great to have things to do, but again there are too many choices to do EVERYTHING I want to do.  As a result, I have been able to do some things, and I will write about that.

Friday night right after work I had to get groceries for the house and a party I was invited to on Saturday.  There was a potluck, and I like cooking.  My friend was having a party at her house, and so the first thing on my to do list Saturday morning was to get the chocolate macaroons aka frogs aka mud pies aka haystacks made and in the fridge to set.  I have finally mastered making them with cashew milk.  At least I hope it wasn’t a fluke. I also used butter, white and brown sugar, vanilla, cocoa, oats and unsweetened coconut.  Other times I have made double batches, and they never set properly.  They stayed gooey and had to be licked off the wax paper as they wouldn’t come off cleanly.  Still delicious, but messy.  Sometimes I goof up on the timing and end up making chocolate granola.  But the ones I made yesterday had that perfect consistency, they were slightly granular, just past the gooey stage, but not dry or crumbly.  I am quite proud that they turned out so well.

As soon as I had them in the fridge I took the chicken I was marinating in Kraft Greek Feta and Oregano dressing.  Yes, I was going to be at a BBQ, but I wanted MY prep work to be as close to finished as possible.  I then popped to the store for a last minute beverage run.  I had bought myself some rum and key limes but needed the mix.  I got some Zevia Cola to mix, and some Gatorade G2. (That is my anti-hangover trick these days, and it seems to work really well!) I needed more coffee, so I decided to grab two of my favourites, Folgers Black Silk and Kahlua flavoured coffee.  I tried the Folgers Intensely Dark, as it comes in the larger boxes, but it doesn’t compare to the Black Silk.  So I had to buy 2 smaller boxes, at least they were on sale.

Rushed home to keep cooking.  I made the biggest batch of Greek Pasta salad I have ever made, as the hubby was wanting some for home too.  That was to go with the chicken that was in the oven.  While I was boiling the pasta, I picked up small pasta shells on Friday night, I started cooking the ground beef to prep for the hot nacho sauce.  It is hot off the stove hot, not spicy hot, and goes so well with nacho chips.  This recipe can be made with soy ground meat replacement for vegetarians.  I packed the rest of the ingredients, and the pot to cook it in.  At this point, my host was starting to get ready to pick me and another friend up to go to the party.  That was AMAZING!  I had enough time to get everything done and packed before he was here.

We had a wonderful time.  We had food, snacks, drinks, music blasting,  we played Backyard Yahtzee and had a BBQ.  I am a little sore from the 2.5 games of Backyard Yahtzee. 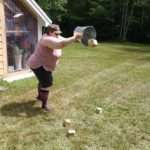 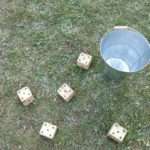 We did have to call interference a few times.  My friends have dogs, and one of them would steal a wooden die every so often.  We’d get it back, and allow re-rolls if needed.

When it was time for cake, we surprised the birthday girl with a minions ice cream cake.  She didn’t even know we snuck it in earlier at the start of the party. She got some presents, and cards, and it was a nice time.  For those of us that stayed after dark, our host made a nice fire in the back yard fire pit.  We gathered around it and just enjoyed the quiet, watching the flames and the fireflies.

Today started off with a little slower pace.  I went to an afternoon matinee with a friend.  I am now finishing this story, in the company of another blogger, we are visiting and writing at the same time.  I am going to be visiting another friend after supper.  In the meantime, there are dishes and laundry to be caught up on.  This has been another busy weekend, and from where I sit now, I think I won this round!  What did you do this weekend?